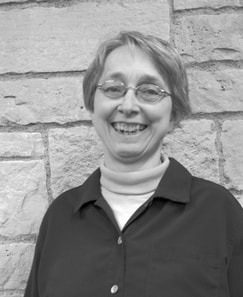 Mary Morris Mergenthal
Mary Morris Mergenthal is a lifelong Minnesotan who grew up on the family farm in the southern part of the state. Her father, Griff Morris, came to this country in 1910 with his parents, who hailed from Blaenau Ffestiniog and Borth-y-Gest in North Wales. As a child Mary learned the Welsh words and alto part for Welsh hymns sitting next to her grandmother at the annual Gyrnanfa Ganu in Mankato, Minnesota. Mary relates that this was the only time that her father would get a substitute to milk the cows! She received her higher education at St Olaf College, the well know liberal arts school in Northfield, Minnesota. Subsequently she and her family have resided in St Anthony Park, a community tucked into the northwestern corner of St Paul, for over four decades. Her daughter, Rebekah Myfanwy, and her husband, Paul Lakosky, are the parents of Mary's much-loved grandsons, Jennings Griffith Axel Mergenthal and Olav Henry Morris Mergenthal.

As is known to many of you Mary has been an eminent contributor to the Welsh-North American community for many years. We will elaborate further on this below. Before doing that let us share how much she is appreciated, respected and loved in the greater Minneapolis Welsh community. It was NWAP's good fortune to have a table next to the Minneapolis UMW Local Committee in the Market Place at last year's Festival in Toronto. Besides being the best of company it was quite remarkable how many of Mary’s local friends, and for that matter those from further afield, came to sing her praises and gently suggest that when the Foundation considered an awardee for the Heritage Medallion in Minneapolis we could not do better than offering it to her in recognition for all that she has contributed_ So as they all the rest is history!

Music has been a rich and rewarding thread in the tapestry of Mary’s Welsh American lee. She has directed Cymanfaoedd Ganu in Minnesota, Wisconsin, Nebraska, Kansas, New York, Pennsylvania and, most rewarding and thrilling for her, at the 1994 National Gymanfa Ganu held in Bellevue, Washington. Locally, she has directed children's choirs at her church for 30 years and sings in the Chapel Choir there. She is a member of both host organizations for this year's North American Festival of Wales in Minneapolis, namely the Minnesota Welsh Association and the St. David's Society of Minnesota Together with her good friend Kay Gavin she chairs the local organizing Committee. She has served on those Boards of Directors and as President of both. She currently is again President of the latter group. In 2012, the St David's Society gave her its Outstanding Service Award for the year. The Philadelphia Welsh Society honored Mary with their prestigious Robert Morris award in 1995. It is indeed appropriate that North America's oldest Welsh Society founded in 1729 should honor the publisher of Drych, the long-established Welsh—American newspaper founded in 1851.

On the national and international Welsh-American scene Mary is probably best known as the owner, Editor and Publisher of Y Drych for 12 years, during which time she took the publication to its 150th anniversary celebration. In November 2003 Y Drych merged with NINNAU. Now united as one newspaper, NINNALI & Y Drych provides complete coverage of the North American-Welsh community. Mary is still a contributor and it has been a pleasure to sit with her at the famous early Sunday morning NINNAU breakfasts at NAFOW so generously hosted by Olga and Arturo Roberts. Mary has attended Cymdeithas Madog's Cwrs Cymraeg regularly and served on the Board of that group. Please congratulate Mary as she receives the 2014 Heritage Medallion joining the distinguished contributors to Welsh-American life who have received this honor over the last twenty seven years.