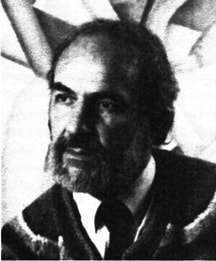 Handel Cromwell Evans
Handel Cromwell Evans was given his name on the day of his birth, Easter Sunday 1932, a few days before his father Joseph was to conduct a choir of two thousand voices in the Messiah Oratorio, by George Frederick Handel, hence the boy's name. From that moment somehow, Handel was associated with music. His considerable gifts as a pianist and as a painter would almost certainly have guaranteed him success at either, but, perhaps rather curiously for a Welshman, it was on the visual- arts that he chose to focus. Initially taught music by his father, Handel Evans Imssed his first musical examination aged four years and ten months, so small that the examiner had to lift him on the piano stool.

Handel Cromwell Evans - Cromwell was a family name - was born in Pontypridd, Glamorgan in 1932. He studied painting at Cardiff College of Art from 1949 to 1954, where he was taught by David Tinker and Eric Malthouse. -His 'mentor' was Clifford H. Lewis. at whose School of Music, he also studied, eventually becoming licentiate of the Royal Academy of Music. Evans inherited his artistic abilities from his parents. His father Joseph came from a family of singers, had a fine baritone voice and was a licentiate of the London College of Music.

As a young man Handel Evans faced a choice of two careers, music and art. After studying with Lewis, Evans concentrated on art and spent two years in the Caribbean (1959-61), where he taught for a while. Otherwise he lived by his painting. A one-man exhibition at the Institute of Jamaica, in Kingston, took place in 1962. After a period in Germany and Italy, Evans attended the prestigious British School at Rome in 1962-63. After further painting in the West Indies, London, Italy, the USA and Canada and exhibitions in Jamaica (1964) and Bahamas (Lyford Cay Gallery, Nassau, 1968), Evans spent 1975-76 studying etching with Stanley William Hayter at Ateleir 17. in Paris.

Evans's style had been transformed over the years. The early work done in Wales ranges across fine portraits in carbon to meancholy in and gouache studies of interiors with a strong Neo-Romantic tinge. Figurative pictures completed in the West Indies are more robust and richly colored. About this time, he first met Dr. Eugene Garfield, founder of The Institute of Scientific Information (ISI), in Philadelphia, who was to commission one of his most important works - "Interpenetrations", a Study painted in oil on canvas. The painting, 12 by 4 feet can be viewed at the ISI offices in Philadelphia. Of the painting, Evans said, "the picture came into being as a result of my search for an image which would express the interdependent nature `of the relationship between Man and the growing mass of information with which his mind deals, and on which it depends" The picture, therefore, is a visual metaphor of the relationship between mind and information.
The mid-1960s period in Grenada included a large, highly complex drawing, 'Caribbean Village'. In 1991, Evans was commissioned by art collector, Robert Bodholdt, to do a version of it in casein tempera, which he regarded then as a stylistic anachronism. The 'Caribbean Village' is featured in the Art Exhibition in the Promenade Room of the Park Hyatt Hotel on May 19, 2001 as part of the NWAF XIV Heritage Awards Festivities.

By the 90s, Evans was well established in Germany, where he lived much of the time - he spoke excellent German - and where he had a string of exhibitions, beginning at the Kleine Galeric, Cuxhaven in 1984. From the mid-70s, the theme of man and technology had become important to him, and he pursued it at length, for example in his series 'The Employees' and in 'Interpenetrations' in 1978-80, on which he worked in both the USA & England the many variations on 'The Employees', tightly organized, asexual, faceless figures are painted in infinitely subtle color graduations.

Handel loved his mother, Marian, dearly and in later life he would often return to Wales from his studio in Germany to be with her and they would enjoy playing the piano together. His mother, Marian, a designer and fitter for West End couture houses, made all of Handel's clothes. For Rome, she remembers him asking for a new  overcoat, in the style of one worn by Sherlock Homes, "needed in two days. I made it. and he wore it for years".

Handel, a son of Wales, was buried on February 27, 1999 in Ramsgate, Kent near his studio in England.