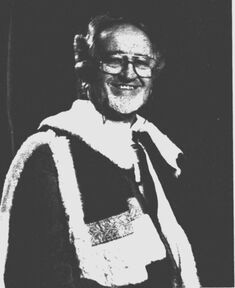 Lord Gordon Parry
The Right Honorable Lord Parry, D.L., Baron of Neyland
The Right Honorable Lord Parry, D.L., Baron of Neyland was born on November 30, 1925 to Reverend sr Thomas Lewis Parry, Baptist Minister and Anne Parry. He was educated at Pembroke County Intermediate School, Trinity College Carmathen and at the Institute of Education, University of Liverpool 1962-1963.
Lord Gordon Parry began his career as House Master and Librarian at County Secondary School in Haverfordwest from 1963-1967, and Warden of Pembrokeshire Teachers' Centre 1967-1976. He was Chairman of the Wales Tourist Board and member of the British Tourist Authority from 1978-1984. He is Presdident of Wales Spastics Society, Pembrokshire Spastics Society, and Pembrokeshire Multiple Sclerosis Society, former Member of Council of the Open University (and Chairman, Education Committee) and Vice President of the Mentally Handicapped Society for Wales.

He is President of the British Institute of Cleaning Science, President of the British Cleaning Council and Tidy Britain group. In addition to serving on the Keep Britain Beautiful Campaign, 1986-1996 and Clean World International, 1991-1996, he visits Macon, Georgia each year for their annual Cherry Blossom Festival. He is President of Milford Docks. He is Chairman of Milford Leisure, Taylor Plan Services and a Director of Seacon Holdings, plc. He was appointed DL Dyfed in 1993. He is a fellow of the Tourism Society, FRSA and Hotel & Catering and Institutional Management Association, Honorary Fellow of James Cook University, Australia, Institute of Wastes Management, Trinity College Carmarthen, University of Glamorgan and Honorary Doctor of Education, Swansea Institute of Higher Education. He is a writer, broadcaster and TV panel chairman.

He is proud to be President of Cor Meibion De Cymru/The South Wales Male Voice Choir. The Choir participated at a concert in the Ottawa Gymanfa Ganu and provided superb music for the two sessions of the WNGGA's hymn service. The Choir later toured Canada from Coast to Coast Lord Parry gave a rousing speech on Wales at the .Banquet, delivered with his customary wit.

He was created Baron Parry, of Neyland in county Dyfed (Life Baron) in 1975 and sits as a peer in the House of Lords. He is listed in Debrett's Peerage & Baronetage. Lord Parry has hosted a luncheon in honor of St. David, around March 1, in the Cholmondeley Room in the House of Lords each year for the past seventeen years. The much sought after luncheon is by invitation only and is limited to 100 persons. This year there were ten members of the House of Lords and ten Ambassadors to the Court of St. James present, as guests, which included Hon. Mr. & Mrs. Glyn F. Davies, a Welsh-American, of the Embassy of the United States. Lord Parry honored the National Welsh-American Foundation with an invitation to Wilfred Greenway and Ms. E. Jean Ward, who attended the luncheon.

He married his wife Glenys Catherine in 1948 and they have one daughter, Catherine Anne, born in 1955. Lord Parry is an avid fan of rugby and football. His "Trinity: 1943-45, A Legacy for Life" (autobiography) was published in 1996.