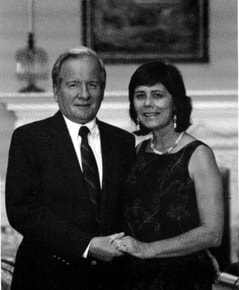 Howard and Rosalind Patrick
Both Howard and Rosalind Patrick grew up in South Wales; Howard in Kenfig Hill before moving to Newport, Rosalind in Caerleon, just outside Newport. They met at Croesyceiliog Grammar School which is located near Newport. Howard went to University College, Cardiff where he received an undergraduate degree in music; Rosalind went to what was then the Teacher Training College in Swansea.

In 1968 Howard was awarded a scholarship by the Welsh Arts Council which he used to study at the music department at Princeton University during January through March 1969. At the end of his three month stay, Princeton awarded Howard a 4-year scholarship to commence September 1969. Howard and Rosalind were married in August 1969, in Caerleon Church, and then left for Princeton. While at Princeton, Howard received his graduate degrees in computer applications in music. At the same time, Rosalind commenced her teaching career and taught at the Crossroads Nursery School (attached to the Institute of Advanced Study), Princeton University - N.O.W. Day Care Center, and Princeton Day School.

After graduating from Princeton, Howard taught in the music department at The American University, Washington, D.C. from 1973 a 1977 and then switched from teaching computers and music, to studying computers and the law. After receiving his law degree in 1980, Howard left academia for the business world; he is presently Director of Contracts for FileTek, Inc. a high-tech firm with about 130 employees located in Rockville, Maryland. During this time, Rosalind received graduate degrees in education from The American University and George Washington University and continued her teaching career in Montgomery County Public Schools, initially as a Special Education teacher, but now as a county-wide consultant assisting students and staff with comprehensive behavior management and in-service training.